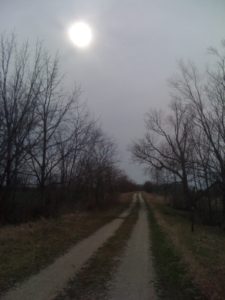 Around 4am on February 17th 2010 I woke up with this picture in my head and began writing. That early morning brainstorming session became the first version of a speech and now book called Staying Positive in a Negative World. From beginning to end it remains the best speech I’ve ever written. The words just flowed out of me in a way they never have before. It was as if some higher power was feeding them to me.

A lot of people see a lot of different things when they look at this picture. For me, it symbolizes life. You start off down the road of life when you let go of the past and move forward to better yourself.